Posted on February 20, 2015 by lrohrbaughwildlifebiologist 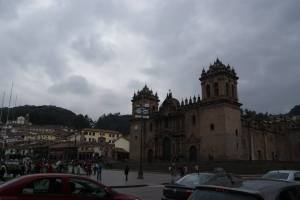 Today has been a day to explore Puerto Maldonado…and I am done. After spending two hours in the Star Peru office trying to gimp my way in Spanish, I managed to change my flight and I depart for Cusco tomorrow. Words cannot even begin to relay my relief to be venturing to the mountains again and seek cooler climates. It is hard to believe, but Puerto is hotter than the jungle. Although, the rains came this morning and have mellowed the temperatures slightly, sweat unceasingly ripples out of every pore.

Seeking a bookstore for a Spanish-English dictionary, I met a new-found friend, Raul. At first I thought he worked there, but again, after using some broken Spanish on my part and broken English on his, he was just hanging out. He was a lawyer and psychologist from Arequipa here for family. The bookstore was closing at 1200 pm, as everything does for “siesta” and Raul embraced me in a whole-hearted hug and confirmed we were friends. I left without a dictionary…

We set out to Anaconda Lodge today for lunch and had Thai food with Holwer monkeys. Sadly,   more monkeys revealed themselves today than the entire time in the jungle.

I know there is  much to fill you in on about my almost two-weeks in the jungle, but still wrapping my head around things. And currently, I am doing the hunt-and-peck method on this foreign keyboard, making things quite challenging. Not to mention, it has literally every word underlined as being mispelled! Not an English-speaking computer. So, if there are typos, a thousand pardons, as I would not know at this point.

Wish me luck in my last minute change of plans for tomorrow and hope things go smoothly. Off to catch a tuk-tuk in the dark, crossing my fingers I make it back to the house without being mauled by a pack of wild dogs…

words and images, inspired by the most interesting time of the day